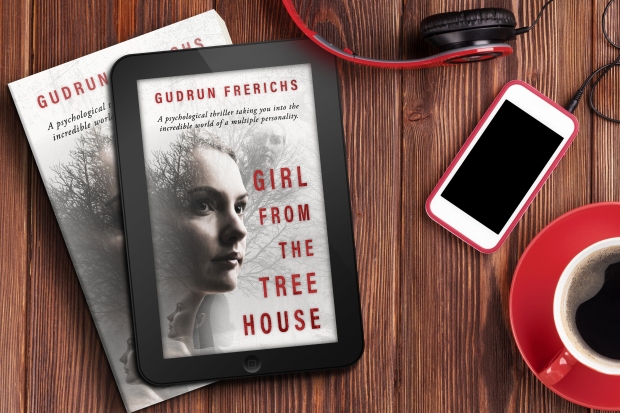 It is almost ten years since I started working on my book GIRL IN THE TREE HOUSE. Back then I stopped after a few months frustrated and discouraged. Somehow what I wrote didn’t feel right. What I read on paper looked like a hybrid between fiction and non-fiction. Weighed down by years of academic writing, I struggled with a piece that, in my eyes, had a serious identity crisis. “Am I a novel, a scientific paper, or an instruction manual?” As it turned out, it was none of them.

Even though I’ve worked for over twenty-five years with many trauma survivors and many people with multiple personalities/dissociative identity disorder, I didn’t want to write another non-fiction, scientific instruction manual. I wanted to show something from the inside out, from the perspective of a person who struggles with the different aspects of the self.

Since then—after devouring everything I could find about novel writing—I wrote and published four romantic novels. In that process I learned so much about the craft of writing, I felt ready to tackle the Tree People book again. It was time to take a fresh look. Rather than reaching into the recesses of my intellectual knowledge and ‘writing’ about what I know, I wanted to stay open to a process of letting the words flow through me instead of coming from me.

Sounds good? It certainly was an amazing process. At times my fingers couldn’t type as fast as the words shot into my mind. I’ve learned so much since my first attempt. Not only about the process of writing, but also about the spiritual and psychological nature of how human beings create their reality. I hope this deepened understanding will bring color to the story.

My aim is to share my understanding and compassion for what is called amongst clinicians Dissociative Identity Disorder (DID, previously Multiple Personality Disorder). I invite you to walk for a while in the moccasins of a Multiple, try it on for size, and hopefully come to see that Multiples are neither green-eyed monsters nor raving lunatics that need to be locked up.

Over the years I have listened to believers, non-believers, and doubters only to realize that in all that verbal warfare the person got left behind. Many publications, scientific and non-scientific, sensationalize the condition and focus only on the ‘dysfunctional’ behavior. In my experience, though, many multiples function in such a way that nobody notices anything unusual in their behavior.

They have friends, colleagues, or family members who don’t even know that they interact with different parts of the personality. Rather than seeing a shift in personality parts, mood shifts are put down to being either depressed, anxious, forgetful, silly, childish, vague, stressed, or focused… all perfectly normal and in the realm of every person’s experience. A multiple once told me:

I’ve been in therapy on and off for the last 10 years and have pretty much achieved integration. The other day I told a friend of many years – he actually has experienced me at my worst when things were really hanging on a thin thread – that I am a multiple.  I couldn’t believe his reaction – he is a health professional and knows about DID – he just didn’t believe me. No way, he said. He even got angry when I insisted and went on about my therapist being incompetent and so on. I thought that was quite funny. Here I was, for years plagued by shame, thinking it must be written on my forehead that I am strange and odd – and people didn’t notice anything.

It has been my experience that Multiples who came to work with me, thought they were totally crazy. I, on the other hand, struggled to see anything in their thinking or their behavior I could label as ‘crazy’. Behaviors that had crisis-teams on high alert, made perfect sense when we took the time to understand what its purpose was. Dissociation is a normal function of our mind. Given that the average person has anything between 50,000 and 150,000 thoughts a day—that translates to between 50 and 150 thoughts a minute—we would go crazy due to the information overload if our mind didn’t have the capacity to dissociate from most of that ‘river of thought’ that flows through us constantly.

Thus what is termed as Dissociative Identity Disorder can equally be considered a normal coping skill raised to an extreme level due to intense, hurtful life events. Under normal circumstances, Multiples are high functioning and many work successfully in responsible, highly demanding jobs. However, in times of stress, being triggered, or suffering additional trauma, Multiples, like any other people, dissociate more and their ability to cope could quickly reach critical limits.

Multiples are experts in dissociating. Often it serves them well, for example when they want to finish a project it helps to dissociate from any other needs, distractions or responsibilities and have a ‘one-track-mind’.  Hence, many Multiples are high-achievers and very successful. Others struggle because their dissociative patterns don’t have such a ‘practical’ side to it. They can end up in calamitous situations and need plenty of support and help.

Before I end, a note of caution: Even though I am advocating seeing DID as a normal human adaptation and certainly reject strongly the notion that it is a mental illness, Multiples usually have had horrendous childhood experiences that cause them emotional pain, overwhelming fears, and anxieties, that may have led to unhelpful or self-destructive coping strategies. At no time is it my intention to minimize the need for compassion, emotional support, and care Multiples have whilst on their journey of recovery.

GIRL FROM THE TREE HOUSE is available on Amazon

and other major retailer

2 thoughts on “Facts and Fiction about MPD/DID”